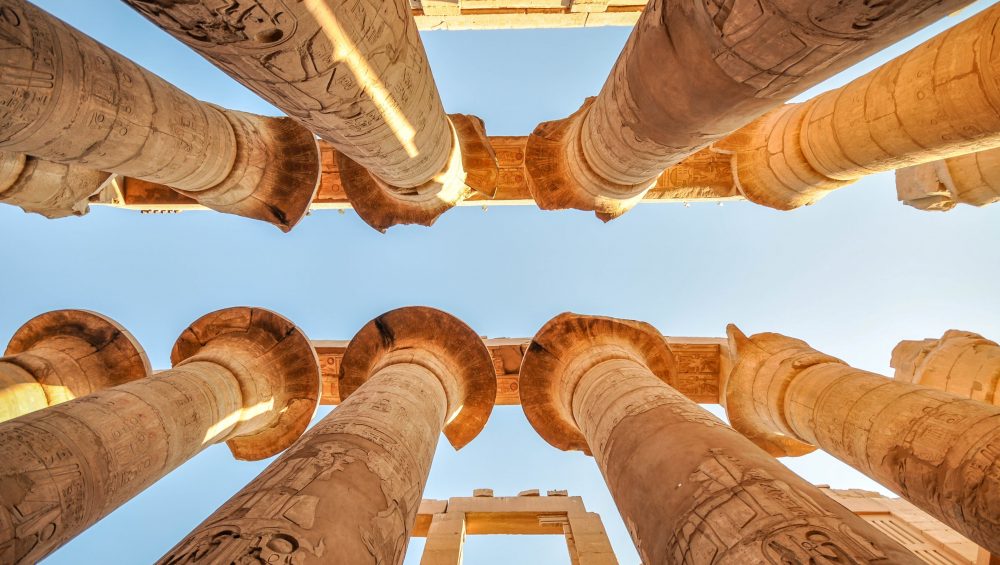 Luxor is the most famous and recognized city in Upper (Southern) Egypt and the capital of Luxor Province. It is known as the oldest place in Egypt. Luxor was initially called “Thebes” in ancient Egypt and was also known as “the largest open-air museum in the world.

The ruins of the early Karnak Temple and Luxor Temple are located in the modern city on the east bank. The lives of residents have not changed for centuries. Luxor city is located between the east and west banks of the Nile River.

Every day, locals and tourists cross by three-masted boats and ferries. Many monuments, tombs, and temples have been discovered on the West Bank. Including the Valley of the Kings and the Valley of the Queens. Every year, millions of tourists from all over the world take part in this famous pilgrimage of ancient Egyptian civilization.

Luxor (Thebes) was the capital of Egypt during the dynasty of the Kings of the New Kingdom. Starting from the 11th dynasty, Luxor has grown from a small town to a prosperous city, known for its noble social status and luxury. At the same time, A center of wisdom, art, religion, and political hierarchy.

In a short period, the city became a wealth center, becoming more and more important in Egypt and the world. Luxor (Thebes) played a vital role in the dissolution and elimination of the Hyksos army that invaded Upper Egypt, making it an important center and force for political, religious, and military control from the 18th to the dynasty.

It was the spiritual capital of Egypt until the late Greek period. Luxor worships Amun and his wife, Mute Goddess, and their son Kongsi, the Moon God. Thebes (Luxor) became the central focus and the most important city in Egypt. The importance and worship of the god Amun increased.

It was linked with the sun god Ra, creating a new “king of the gods” for Amora. His vast temple at Karnak, north of Thebes, was the most important in Egypt until ancient times. It has been the religious capital of Egypt until late Greece.

Luxor worships the god Amon and his wife Mute and their son Kongsi. Known as the moon god because Thebes (Luxor) rises to the center of Egypt and is the most important city. The god Amon increased in importance.

He worshipped and allied with the sun god Ra, creating a new “king of the gods,” Amon Ra. His huge temple at Karnak, north of Thebes, was the most important in Egypt until ancient times.

Top 8 Amazing Things You Must See in Luxor

Luxor is considered “the largest open-air museum globally” and has some of the most interesting, largest. The most beautiful places in Egypt.

There are hundreds of inspiring temples to visit all over the country. But we have compiled a list in Egypt which lists the most unique and exciting places that we think are best for your Egyptian holiday.

The Karnak Temple in Luxor was built around 2055 BC. is one of the most famous temples among all the temples in Egypt. It is a must-see for anyone who travels to Egypt.

In short, the Karnak Temple is magnificent. It is dedicated to religious beliefs such as Amon, Mute, and Kongsi. So it is the largest religious building ever built and one of the most magnificent.

It is still inspiring today, and as you walk in the shadow of its huge colonnade corridor. Try to imagine how impressive it looked more than 4,000 years ago.

The Luxor Temple on the east bank of the Nile River in Luxor was built by Amenhotep III around 1390 BC. It is considered one of the most beautiful places in Egypt.

Later, with the addition of legendary pharaohs such as Tutankhamun and Ramses II. The Luxor Temple has a rich historical significance. The Luxor Temple was initially called It rsyt, which means “Sanctuary in the South. It is the most sacred place and the place where the main god Amon lives.

The Mortuary Temple of Queen Hatshepsut is called Djeser, or “brilliant splendor. It is indeed one of the most incredible temples in Egypt.

With its multi-level terraces and iconic colonnade corridors, it is a temple worthy of a rare but powerful pharaoh.

There are many examples of exquisite sculptures and reliefs in the Temple of Hatshepsut, dating back to 1480 BC.

Valley of the Kings

Hidden in the rocky cliffs of Luxor’s west bank, the Valley of the Kings was the last resting place of the kings of the 18th, 19th and 20th dynasties. The first stop for tourists visiting the West Bank.

Since it is believed that the deceased will be accompanied by the sun god (or possibly merged with the sun god) at night on a boat sailing in the underworld. The tomb’s walls are decorated with words and scenes representing this journey.

They are given to the deceased Instructions—63 tombs in the valley list celebrities in Egyptian history. Including the famous boy, King Tutankhamun. Open in a rotating system to protect the painting from moisture damage as much as possible.

Tombs of the Nobles

If you don’t have enough tombs in the Valley of the Kings, please go directly to the nobles’ graves, which may be less famous. But they include better-preserved tomb paintings.

The 400 tombs of different political figures can be traced back from the Sixth Dynasty to the Ptolemaic era. The tomb paintings here are not so concerned about guiding the dead in the afterlife; on the contrary, they show scenes from daily life in Egypt.

Tomb paintings If you are short on time, you can choose to visit Sennofer’s Tomb and Rekhmire’s Tomb. Both have incredibly detailed pictures depicting scenes of men’s daily life, work, and family life.

This small and charming museum in the center of Luxor explains the process behind ancient Egyptian mummification through a series of informative and well-designed exhibits. Exhibits include royal mummies (humans and animals) and tools (including the spatula used).

Scrape off the brain of the deceased) used in the mummy production process. It may not be the best museum for those who are particularly squeamish. But clear information panels and well-thought-out exhibits are a must for those who want to learn more about the Pharaoh’s burial customs. Especially check out No. 21. The mummy of Marcel Hati, the high priest of Dynasty Amon, is exceptionally well preserved.

Deir el-Bahari is a collection of three temples: Nebhepetre Mentuhotep’s funeral hall, Hatshepsut’s funeral hall. Thutmosis III’s funeral hall, but today, the only time that can be seen is Hatsheep Suter, because the other two have been.

While not sharing the exact intricate details and architecture, the temples of the time were varied. It is essential to note that Hatshepsut was a female pharaoh who ruled As a man! She is dressed unusually with Hatshepsut Temple. It is located in a valley basin surrounded by cliffs.

The Terrace Temple is a three-story column structure designed by Senemut. The royal housekeeper and architect of Hatshepsut (and possibly her lover-outrageous). The architecture of the temple has changed as a result of poor archaeological reconstruction.

The terraces only give Senemut’s original design and the absence of most of the statues (or the destruction of Hatshepsut after his death, as a posthumous condemnation) a vague concept.

Don’t miss the relief to recite the sacredness of Hatshepsut, the story of the birth and many statues represent her as a male pharaoh. But still, give a touch of her gender with her female characters and facial expressions. It is a hot tip, don’t miss the sunrise ride in a hot-air balloon because it is one of the best ways to look at these temples differently.

Medinet Habu is the common name for the mortuary temple of Ramses III. Besides its inherent scale and the importance of architecture and art. This temple is probably best known for its source of inscribed reliefs. Depicting the emergence and failure of the “people of the sea” during the reign of Ramses III.

There are more than 75,350 square feet. Most of the reliefs on the walls are well preserved. This temple also follows the Orthodox mortuary of the New Kingdom, very similar to Ramesseum.

A distinctive feature of this temple is its substantial adobe walls. The initial entrance was through a fortified portal called the middle (a standard architectural part of Asian fortresses).

Things to Do in Luxor

Early risers who hope to get up while still dark can take a sunrise hot-air balloon to get a bird’s-eye view of the West Bank. With its green farmland hidden in arid cliffs. The bank overlooks the temples and cemeteries of the area from a height.

The flight time is usually about 45 minutes. But the hot air balloon travel experience will take about 3 hours to pick up. Return there to your hotel.

There are various operators in the city. Group hot air balloon trips usually use a larger basket, carrying about 24 passengers and pilots.

If you have enough temples and tombs during the day, there is no better way to relax in Luxor than to take a three-masted sailing boat to Banana Island. Sailing 5 kilometers upstream from Luxor to this palm-lined island is a perfect and relaxing contrast to the dusty days of exploring the Pharaoh’s treasures on the west and east coasts.

There is no problem with renting a felucca. The captain serves customers on the Corniche along the Nile in the center of Luxor. Return by felucca from Banana Island; the journey takes about 3 hours. You will see the most majestic river.

You can enjoy the cool temperatures of Luxor in winter but in this season. You will also find groups of tourists and high prices.

Although you will get great hotel deals once summer arrives. The unbearably warm temperatures make you feel uncomfortable when visiting Luxor’s attractions from May to September.