Top 16 Things to Do and See in Sharm El-Sheikh 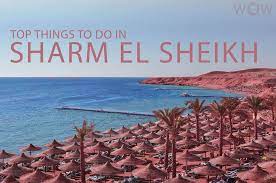 The History of Sharm El-Sheikh

Sharm el-Sheikh’s strategic location helped transform this once small fishing village into a major port for the Egyptian navy. Sham was occupied by Israel during the Suez Canal Crisis in 1956 but was regained by Egypt in 1957.

The United Nations stationed a peacekeeping force there until the outbreak of the Six-Day War in 1967 when Israel reoccupied sham. Sharm el-Sheikh was always owned by Israel until Egypt and Israel signed a peace treaty in 1979.

Until 1967, Sharm el-Sheikh was still a tiny fishing village. After Israel built the city of Ofila, commercial development in the area began, attracting tourism and capital investment. There are hotels on the south side of the Bay, and field schools, diving clubs. The famous Naama Bay Hotel on the north side.

The Egyptian government launched an initiative to develop the city of Sharm to transform it into a tourist destination. Sharm has now become one of the most famous destinations for foreign tourists to visit Egypt.

Since the development of Sharm el-Sheikh, it has hosted a series of Middle East peace conferences. It including the agreement on Palestinian autonomy in the Gaza Strip on September 4, 1999. Several other world trade conferences.

Charming Things to Do and See in Sharm El-Sheikh

Paradise awaits between the gates of the city of peace, Sharm el-Sheikh. Where you can enjoy all the magical sights and tropical activities of the entire city. The pleasant climate of this city makes it one of the ideal destinations to enjoy a complete vacation and create the happiest memories in life.

Ras Mohammed National Park is in Sharm el-Sheikh’s top spot on the tourist map, Located 38 kilometers south of Sharm. This peninsula is surrounded by some of the most incredible diving spots globally, with magnificent beaches and great deep-sea snorkeling.

It is the second-largest saltwater and mangrove forest and lake in the world. The focus of diving trips is on offshore coral reefs, while a day trip to Ras Mohammed explores the desert environment of the peninsula and its beaches. Stopping for swimming and snorkeling along the way.

Old Pier Beach’s best beaches (with its first-class coral reefs easily accessible from the shore) and Aqaba Beach. Travelers looking for beautiful views should head to the Shark Observatory Cliffs at the southern end of Ras Mohammed. Where the scenery extends to both sides of the Red Sea.

For many advanced divers, a trip to Sharm el-Sheikh means only one thing: diving in Thistlegorm. One of the best shipwrecks globally, this ship loaded with cargo for the British army was sunk by bombers during World War II.

The fish flew over their room now, and weapons that had never reached the front line. The sunken ship is located in the Cuba Strait near the west coast of the Sinai Peninsula and offers diving trips. As a night cruise on the boat.

These diving trips usually include at least two dives at the shipwreck in Thistlegorm and dips at the wreck in Dunraven (or one of Ras Mohammed’s dive sites) along the way. Many also include night diving opportunities at the Thistlegorm site.

Soak Up the Sun at Naama Bay

Naama Bay is adjacent to white sandy beaches and swaying palm trees and is the center of tourist life in Sharm el-Sheikh.

If you are tired Of the beach places, there are many restaurants, cafes, and souvenir shops here, but Naama Bay is the entire beach.

A walkway runs through the entire beach area, followed by a series of luxurious high-end resorts. For those looking for a quiet sunbathing holiday, Naama Bay is one of the best options in Egypt.

There are excellent facilities throughout the beach area, including plenty of parasols and deck chairs. The cafe by the sea means you don’t even have to leave the beach all day.

Please note that the entire beach is divided into different sections-areas owned and managed by the hotel, which guests can enter for free.

Jolanda Reef (also known as Yolanda Reef) is one of the most popular dive sites in the Ras Mohammed Marine Park area.

When it ran aground on a coral reef in 1980, it carried a batch of bathing porcelain and was the shipwreck’s location.

In addition to exploring the highlights of the shipwreck site. Shark Reef’s steep iridescent coral wall leads to the shipwreck. Jolanda Reef Coral Garden Plateau is the preferred destination for marine life observation. Barracuda and snorkelers are often seen here.

One of the best destinations for diving in Sharm El Sheikh is Ras Um Hid Beach. Just at the southern tail of the city, the lighthouse. Where people on the beach or Internet cafes have a hunch on the cliff between diving activities nearby. There is a good coral reef near the coast in the water, which is easy to reach by non-divers.

Farther from the sand, the Ras Um Sid Reef is the perfect first dive raid and is used as a test drive site for many local dive operators. However, if you only dive here, many coral fishes look closer to the shore.

The Sahaba Mosque incorporates Fatima, Mamluk, and Ottoman styles in its architecture and interior design.

Designed by Fouad Tawfik, this mosque has two 70-meter-high minarets and is the second largest minaret in Sharm el-Sheikh. This mosque is considered the most spectacular building in Sharm.

If you don’t have at least one night of stargazing, you can come to Sharm el-Sheikh and leave.

Spend a charming evening suitable for all ages. When you enter the desert, you will experience genuine traditional Bedouin hospitality.

It starts with an Egyptian feast. When the sun is completely set, you can look up at the clear night sky and enter the Milky Way directly.

Although most people come to Sharm for beaches and coral reefs. There are many other cultural sites, including several beautiful places of worship.

Although the Al-Mustafa Mosque reproduces the Fatima architecture of Cairo’s iconic Zahar Mosque, which is particularly beautiful when lit at night.

The Al-Sahaba Mosque in the Old Market has selected the best architectural elements from Fatima, Mamluk, and Ottoman styles. At the same time, the heavenly Coptic Cathedral is famous for its ceiling frescoes of the vision of St. John of the Apocalypse.

You can find most cuisines in Sharm el-Sheikh, from Cajun cuisine to Mexican cuisine. However, if you are interested in trying something more localized, check out the Egyptian restaurants in this city.

The most highly rated option on TripAdvisor is El Kababgy, located in the Mövenpick Resort in Naama Bay. Choose kebabs and kofta on a traditional charcoal grill, or try authentic tagine or hawawshi (local bread stuffed with minced meat).

From the sun-drenched beaches of the coast to inland, the rugged and mountainous center of Mount Sinai is lovely. To enjoy this wild landscape, you can hike 209 kilometers inland from Sharm el-Sheikh to the top of Mount Sinai and see the surging orange peaks in front of you.

Respected by the three significant monotheists as the place where Moses accepted the Ten Commandments, hiking to the top is a pilgrimage for many people (usually combined with a visit to St. Catherine’s Monastery at the starting point of the hike).

There are two essential trails at the top. The Camel Trail is an old turnaround road. The Stairs of Repentance is a more difficult but more beautiful stone step carved by a monk in the monastery.

Most trails run overnight and arrive at the starting point of the course in the early morning to complete the trekking of the camel trail in the cool and dark time. Reach the top of the mountain on time, and watch the sunrise of the surrounding peaks.

Shark’s Bay is one of the newest resort development areas in Sharm El Sheikh. It is located 11 kilometers north of Naama Bay. The atmosphere here is more upscale. Some resorts and hotels The most luxurious five-star hotels in Sharm gather in Sharks around. The Bay’s sandy beaches are vast.

Like Naama Bay, the beach area is run by individual hotels. This means that the facilities are well maintained and restaurants and cafes on the beach. Snorkeling offshore is also good here.

Behind the beach, the center of life in Shark Bay is Soho Square. Including some of the best restaurants and cafes in Sharm el-Sheikh, such as shops. It means that guests of Shark Bay Resort usually choose not to leave the northern part of Sharm during the entire holiday period.

The Strait of Tiran in the Gulf of Aqaba in the Red Sea is home to some of the top diving sites for experienced divers in Sharm el-Sheikh, while Jackson Reef is usually located in Sharm el-Sheikh. Sharm is on the list of most divers traversed.

It is the northernmost coral reef in the Strait of Tiran and one of the best places to watch hammerhead sharks and stingrays in the area. The coral reef is rich in hard and soft coral gardens. The advanced divers can also explore the wreckage of the Laura freighter that ran aground in 1981.

Snorkel or Dive the Blue Hole

The most notorious dive site in Sinai is the Blue Hole, just 100 kilometers north of Dahab and Sharm el-Sheikh. The shame of this sinkhole is due to the number of lives it has taken. But all deaths have occurred.

Here, they are due to divers diving beyond the normal range of recreational diving. Although the site is known for its dangers, divers staying within the sensitive range are safe here.

The fish’s life and the incredible view of the ethereal blue below make this a lovely drive. It is also a popular snorkeling spot. If you don’t want to go deep, you could see a lot of fish hovering near the surface of the water.

In 1876, the SS Dunraven returned to England from Mumbai (then Mumbai). When it hit a rock and sank from the tip of the Sinai Peninsula. Barnacle inlaid hull. Divers often see large groups of colorful coral fish, cardinals, goatfish, scorpions, and pipefish patrolling the area.

It takes two hours to get to the dive site from Sharm el-Sheikh. So Dunraven is often combined with one of the dive sites in the Ras Mohammed Marine Park area for a day trip or as a stopover.

Sharm Old Market (also known as Sharm al-Maya) is the open-air market (bazaar) area of ​​the city where you can find many flashings, Arabian lamps. Traditional hookah pipes, and exquisitely carved wooden products.

Or later, when the hottest weather of the day dissipates, you can shop and browse comfortably. The area is full of cheap and lively restaurants and cafes, making it a great place to spend the night.

Sharm el-Sheikh is one of the best areas for finding classic Egyptian cuisine. As restaurants in the tourist area focus on more international dishes. Go here to enjoy the traditional cafe life, enjoy hookah and Arabic coffee.

At the edge of the market, the new Al-Sahaba Mosque has a majestic appearance and is influenced by Fatima, Mamluk, and Ottoman styles.

Due to the current solid on-site, it is recommended that experienced divers dive here. It is also a popular spot for technical divers because advanced divers can explore the deep areas of the Three Arches.

When drifting along with the site, a wealth of fish can be observed, including clownfish, pufferfish, and giant moray eels. The iridescent branches and soft corals are among the most primitive and vivid corals in the Red Sea.

Where to stay in Sharm El-Sheikh?